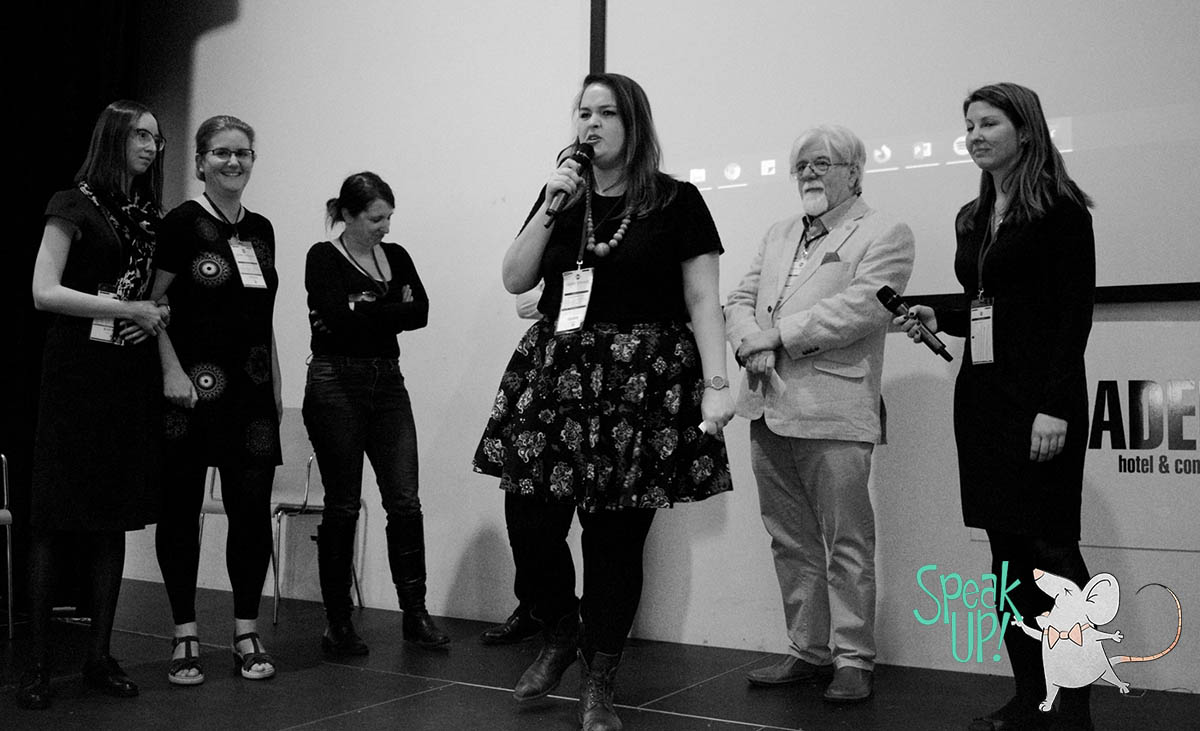 It’s 2011, the year before I arrived in Prague, and I’m working in a company in Cape Town. It’s my job to design and create business presentations so I spend at least 8 hours a day sitting behind a computer and I hate it! There is one thing that I hate more than the monotonous work though and that is my team leader. My team leader has an anger problem and often bangs his fists on the table, throws papers around and shouts at his teammates. One day he made my teammate cry and when the manager asked me what was going on I said “nothing.”
No one should accept this behaviour but I put up with it for over a year because I didn’t know better. I didn’t think it was my place to speak up against an authority and when it came to my end of year evaluation the manager said, “Your work is good and I’d love to give you a promotion, but your problem is you’re as quiet as a mouse.”

The phrase “Speak Up” has two different meanings. The first: is to speak louder. The second: to express an opinion freely. I believe we all have the ability to speak louder but expressing your opinion can be a lot more difficult at times.
Words are powerful: Words have the power to change how we feel, how we think, how we view the world and how we view ourselves. I think we can all appreciate the value of speaking up but many know that this is not always easy. Many of us need a little guidance and confidence to be able to speak up and this is why I want to help others to do this through the various workshops I provide.
Being able to speak up can be life changing and in line with this I’d like to share two stories with you to show how speaking up changed my world.

When I was a student I studied journalism and linguistics and every summer holiday I would work at a local newspaper. One summer in 2008 my editor told me I could write about anything I wanted to so I took to the streets and looked for a story. I noticed that on almost every street light there was a poster advertising “Same day, pain free, safe abortions.” I passed hundreds of these posters: same words, same design, same colours but the name of the doctor and the phone number was different. I felt there was something suspicious about this and so I decided to investigate. I collected 10 different phone numbers and then I looked up the abortion laws in South Africa. I found out that a woman over the age of 18 is allowed to have an abortion without giving any reason if she is less than 13 weeks pregnant.  If she is under 18, she needs to be advised to consult her parents. I then phoned each of these 10 “doctors” asking them the following: “Hello Doctor, I have a friend who needs to have an abortion urgently. She is 13 years old and 18 weeks pregnant. She needs to be able to go to school on the same day. Can you help her?” All but one said yes, all of those that said yes used the abortion pill and none of them said she needs to consult her parents. I then phoned my doctor and asked him to tell me about this abortion pill. It turns out there is nothing painfree or safe about the abortion pill which is why, legally, you need a prescription and to be under 24 hour doctor surveillance when taking them. These “doctors” were putting the lives of women in danger and what’s more, these “doctors” were charging between 500-600% more than the price of these pills in a pharmacy. I ‘spoke up’ about this injustice by writing my story for the newspaper. It was published and it eventually lead to the arrest of 11 illegal abortionists. I’d like to think that some women had safer options because of the information I shared, because through my article I spoke up.

When I arrived in Prague I couldn’t stop thinking about that manager telling me that I was as quiet as a mouse and I decided that I needed to learn how to speak up for myself. So I joined Toastmasters – an international organisation that has helped many improve their public speaking and leadership skills all around the world. I quickly rediscovered my love of public speaking and when I was asked to do a workshop at the club officers training I was thrilled. The toastmaster who asked me to do the job told me to “make it interesting!” and so I made it my mission to do just that. It was my job to make sure the future officers knew what the offer roles were and to make it interesting. As a result, I drew cartoon characters for every role, I wrote funny descriptions to go with each of them, I created a fun, problem-solving activity with ridiculous scenarios and my favourite part was when I introduced each character by shouting over the sounds of ACDC blasting in the background. I had only been a toastmaster for a year at that point, and there are many things I would do differently now, but I felt I certainly met the requirement of making it interesting. Unfortunately, I heard something I shouldn’t have before my workshop ended. I heard two toastmasters talking to each other and one said “I could hear you rolling your eyes.”  As soon as my workshop ended, I left the venue embarrassed and convinced that I would quit toastmasters immediately. But the very next day, I received several emails from people at that workshop praising my creativity and interesting take on things. I almost let one person’s words stop me from speaking up, but fortunately several others convinced me that my voice was worth hearing. A few months later I went on to win first place in the Toastmaster’s English Humorous Speech contest at the Division level and then 2nd place in the District 95 contest where I competed against 12 other contestants from Northern, Eastern and Central Europe. I bet that director never expected this quiet little mouse to go from squeaking to speaking to this extent.

We have one voice to use and one lifetime to use it, so for goodness sakes, if you have something important to say, SPEAK UP!